This morning the Balinese government announced that due to COVID-19 and the risks involved of having large gatherings that Ogoh Ogoh parades will be cancelled.  This decision is in the best interest for the health and safety of everyone in Bali and Lembongan. However, it comes with an emotional cost to the Hindu people who consider the Ogoh Ogoh “New Years Eve” parades as one of the most significant celebrations on their calendar.

We write this blog with particular respect and thoughts for everyone who has contributed to this year’s Ogoh Ogoh.  One of our staff members has been heavily involved with her Banjar Ogoh Ogoh preparations, which began 3 months ago, involved endless hours and also considerable financial contributions by everyone within the Banjar community.

The preparations have included making of the enormous paper mâché monsters, practicing & preparing gamelan music & dances to accompany the Ogoh Ogoh, plus designing and producing T-shirts for the parade participants to wear.

They were notified of an emergency meeting at midnight last night to be held at 10am today, when the decision to cancel the parades was announced.  It was with mixed emotions and a heavy heart that she then had to pass on the news to her team which is proudly made of up of a large number of teenagers who have gathered after school everyday and into the evening to work on the preparations.

They have for now wrapped the Ogoh Ogoh in plastic and hoping they can be retained and used for next year.

She is an extremely wise young lady, and as a Hindu, holds great pride for her religious beliefs and the significance of the Ogoh Ogoh parade. For these reasons we wanted to share her thoughts with you as it has been an emotional day for her as COVID-19 continues its impact across the globe, no-one is untouched by it.

In her words, ” I understand it has to be cancelled to stop the spread of COVID-19, I am so grateful that when I told all the teenagers in our Banjar they too were so understanding.  We need to look after the health of our family and friends”.

The Ogoh Ogoh parades are a truly immersive experience, symbolising evil creatures and are demonstrative to scare off the evil spirits prior to the start of the  New Year.  Ogoh Ogoh are large giant monster dolls, made by the local younger generation of Banjar members, carried on bamboo platforms.   They are shaken, loud music & drums are played,  young children walk in front of the large paper mâché creatures holding torches / candles, women follow performing dances and men playing loud drums & cymbals.  The parade ends with bonfires when these laboriously designed monsters are set a light and fall to ashes,  the final act of purification before heralding in the New Year  (Nyepi) the next day. 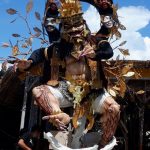 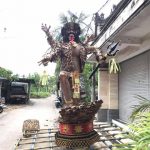 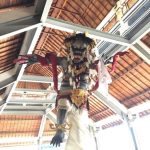 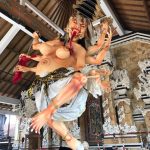